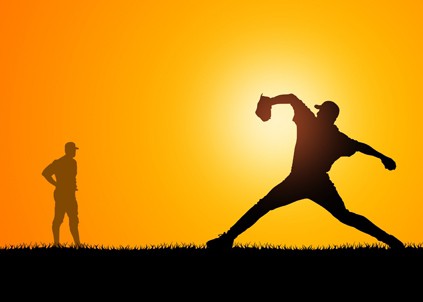 I’m a baseball fan. The day that pitchers and catchers report to spring training feels like the first day of vacation for me. Your happy place may be a beautiful white beach with a light breeze and a palm tree. My happy place is above the 1st base line, spittin’ sunflower seeds.

I was sitting in Arizona at a spring training game a couple of weeks ago, sweating in the sun, waiting for a new pitcher to throw a couple, and watching the guy on deck take some swings, when I finally got it. This game is slow. There’s a lot of waiting. There can be a lot of pitches in one at bat. Sometimes there’s no score till the end of the game. Sometimes you watch the players just talking around the pitchers’ mound. You don’t even know what they’re saying. It’s slow. There’s a lot of space between the moments of excitement, and the longer you’re a fan, the less excited you get about hits and things, because it’s a long season. Anything can happen. So there’s a ton of waiting time when there’s nothing to do, like a free pass to hang out, or perfect the art of opening sunflower seeds.

I remember hearing The American, Buddhist nun, Pema Chödrön, tell a story a few times. It was about a Tibetan Buddhist teacher growing up in a busy household. His father was a teacher, he himself was being raised as a teacher, so his mother was very busy. She was responsible for receiving many visitors, and cooking for everyone, and we aren’t talking about granite counter tops and gas stoves. He and all the other teachers would practice sitting meditation daily, but he rarely saw his mother meditate. Yet she looked as if she meditated more than any of them. She was so centered, had so much presence of mind. The son asked his mother why she appeared to have such a calm about her, but never meditated. The mother told him, “I meditate all the time.”  She said, while she was waiting for water to boil, she meditated. While she was walking from one home to another, she meditated. When she was waiting for people to finish eating, she meditated. She mediated in between the cracks of her day, all day.

I love this story, though I’m sad to say I cannot find reference to it online. When I first heard it, I had small children, so I used to spend a lot of time waiting. Waiting for shoes to be tied. Waiting for tantrums to finish. Waiting for schools to get out. Waiting in grocery lines. Waiting for little league coaches to stop jawing at kids. I began to use these times as an opportunities to breathe slowly, bring my thoughts to the present moment, relax my muscles, and notice.

When you meditate in the cracks of your day, there are many things you are not doing. You’re not berating yourself. You’re not saying hurtful things to others. You’re not ruminating about something you’ve already ruminated about. You’re not comparing, criticizing, indulging. You aren’t working yourself into a frenzy of disturbing emotions. You aren’t heckling! You are practicing being open to whatever is happening at the time, without judgement. You are cultivating presence of mind. 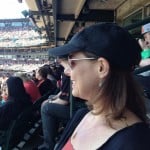 I don’t know if baseball counts as meditation, but it works for me. A lot of waiting, watching, breathing. What’s not to love? I can meditate in between the cracks of my day, and in between the pitches at the park, just taking things one sunflower seed at a time.

Celebrate the Love You Have in Your Home Now

off into the world…

I’m so sick of my big red pen